Performing_names was devised as a work in process about ways in which naming practices affect identity, reinforce power, force invisibility, mark gender and/or have been culturally accepted throughout the world, but should be questioned. The work was conceived during my residency at Artscape Gibraltar Point (AGP), Toronto Island, Canada, in August 2018. It comprises six scenes: 1. geographic names;  2. names and tradition; 3. patriarchal naming practices;  4. meanings of personal names (of the performer's and of audience members); 5. women and identity; 6. anonymity. The script that was first shared at AGP addressed Toronto and its name changes, the Inuksuk as a symbol of presence and mobility (but also of anonymity), the transmission of power through patriarchal names, women artists and writers resorting to pseudonyms, and anonymity as the status shared by outsiders, animals and the invisible. The work is open to adaptation, especially to accommodate local HERstories wherever it is performed.

Deslady (Curitiba, 2018) is an adaptation of William Shakespeare’s Macbeth for a solo performance by Nathalia Luiz, whose clown name is Tinoca and works in Curitiba, Brazil, with the "Cia dos Palhaços."  The discussion centers Lady Macbeth’s violent identity, the power relations and madness, exposing the greed and lack of freedom in androcentric cultural practices.  Testimonies offered by women who joined the creation team are quoted in order to illustrate their perceptions as agents of composition. The multiple codes of theater and of female clown practice in the roles of Tinoca, Lady Macbeth and Deslady are addressed. Margie Rauen was research consultant and assistant director to the production, which was launched in August 2018. Read more about the solo's ongoing performances at

How do women become women?

The first part of the work-in-progress was done in 2014, when I and five of my junior research students chose to draw on Simone de Beauvoir's The Second Sex to devise an intervention  at the Santa Cruz campus, in Guarapuava, Brazil, with the objective of randomly inviting students and professors to record their answers to the question  “How do women become women?”  Secondly, the students juxtaposed the narratives that we collected by editing a video as an exercise of relational aesthetics and post-production (as discussed by Nicolas Bourriaud). As a third stage, we put together a modest installation to show the video during a symposium of arts at UNICENTRO, also in 2014. After this symposium, one of the students, namely Rosani Probst, took an interest in interacting with women whose educational opportunities did not allow them to reach higher education, and she set out to record their testimonies outside of the university. After Rosani Probst's images were available, I continued working with Lucas Lima, the video maker who edited the mp4 segments for the final YouTube version, which was featured in the American Society for Theatre Research (ASTR) screening program, in Minneapolis, U.S.A., in November, 2016, followed by a discussion of the prevailing challenges faced by women. I wish to thank all the volunteer participants, and the former students Amanda Pires, Caroline Siqueira, Jessica Przygocki, Jessica Prestes, and especially Rosani Probst, for their dedication to this creative process.

Margie Rauen’s own artistic research as a director and writer has pursued the creative appropriation of canonical drama in her scripts Ofélias/A-void-ing, Juliets, and Shadows of Sycorax, which add up to the triptic Digital Woman, focused on the empowerment of marginalized women in different ways. These plays were done in an art gallery, in 13 different community venues, and in a prison with teenager girls, respectively. Margie’s additional applied research since 2003 has pursued the engagement of the audience in site specific performance, which led her to organize the book A interatividade, o controle da cena e o público como agente compositor [Interactivity, control, and the audience as a performance agent], published by the University of Bahia Press (Salvador: EDUFBA, 2009), featuring 9 chapters by artist-researchers from Brazil.

JULIETS, playtext and direction by Margie Rauen. Forum play performed at the nine regional sites of the Cultural Foundation of Curitiba, sponsored by the City Fund for Culture in May 2007, with the actress Cássia Damasceno and the actors Adriano Carvalhaes and Gilmar Rodrigues. Produced by Caminho das Artes.

Work in progress. A group work based upon the Theatre of the Oppressed with teenager girl prisoners at Unidade Social Oficial Joana Miguel Richa, Curitiba –Pr.

Dramaturgy and directing by Margie Rauen.

Book Chapter in Reflexões sobre a Cena. (available only in Portuguese).

In addition to her professorial work, time permitting, Margie provided consulting as dramaturg and/or assistant director to professional productions, namely Guilherme Durães’s  A-TOR-MEN-TA-DO CALIBANUS (2001), Hugo Mengarelli’s play O Cavaleiro Solitário (1994), even once engaging in a complex three-year project with director Aparecido Massi and the Lanteri Group for a pageant that was finally produced at Pedreira Paulo Leminski, an open space of a former granite mine in Curitiba, Paraná: this was her communicative translation of William Shakespeare’s Julius Caesar, seen by an audience of thirty thousand.

About the creative process

Patrícia Galvão (1910-1962) has been renown as a Muse of the Brazilian Anthropophagic movement, during the early years of modernism, but she also worked as a newspaper and fiction writer, a translator, a visual artist and an Arts critic, a revolutionary artist and a theatre director. In each of these roles, the ambiguities of the woman, mother and activist offer a fascinating content for the composition of our performance script, which emphasizes the intense identity shifts lived by Patricia Galvão under her pseudonyms Pagu, Patrícia and Mara Lobo.

The encounter with Pagu is a consequence of the BoatoClandestino troupe’s research about the relationship between performance and social change. Margie Rauen, the director, created and produced Shadows of Sycorax (with young women in a detention center, Ofélias A-VOID-ING (a solo performance with actress Patricia Kamis) and Juliets    (a forum play with Cassia Damaceno,  Adriano Carvalhaes and Gilmar Rodrigues). These appropriations of The Tempest, Hamlet and Romeo and Juliet, respectively, encompass women studies, various techniques drawing on Bertolt Brecht, Augusto Boal,  and performance art. Personas de Pagu (a work in progress since 2012) blends Margie’s continued research about audience participation and the Coletivo BoatoClandestino political focus.

Monologue about the post-colonial condition based on William Shakespeare's The Tempest, by Guilherme Schiffer Durães, with my assistance in translation, dramaturgy and directing. Staged outdoors, in a tunnel, during the Curitiba Theater Festival in 2001, after dramatic readings in Salvador and Rio de Janeiro.

[The unbelievable return of the lone rider] 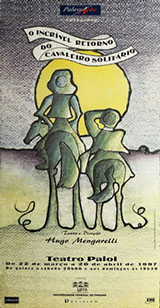 A parody of Miguel de Cervantes's Don Quixote, by director Hugo Mengarelli, with my assistance as dramaturg, 1994.

Best actor of the year prize from Guaira Theater to Tupaceretan Matheus. 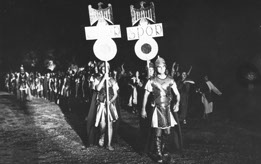 Julius Caesar (for a city pageant at the Paulo Leminski outdoors theatre), my communicative translation into Portuguese and assistance to Director Aparecido Massi, Lanteri Group, Curitiba, 1992.

The "Manifesto of Sex, Gender and Identity Freedom" was published in the electronic version of the magazine Abrigo Portátil, edited by Cristiane Bouger and published by  Editora Medusa (Curitiba, 2016).